PRESENTATION : The Consiglio Italiano per i Rifugiati (CIR) (Italian Council for Refugees) is a nonprofit and nongovernmental organization (Onlus) formed in 1990 with the support of UNHCR.  Among CIR's founding organizations and members of the Board of Directors are Italy's most important humanitarian organizations and trade union confederations.

CIR's mission is to defend the rights of refugees and asylum seekers, to establish an integrated and efficient system to manage the diverse phases of resettlement, integration, and eventual repatriation assistance, in furtherance of international human rights norms established by the 1951 Geneva Convention Relating to the Status of Refugees and by more recent European regulations.

Among the activities that have defined and distinguished our first 23 years of work, during which we have assisted more than 100,000 people, the most significant are:

All of CIR's activities are centred on the humanity of each individual, her rights, her needs, and her dignity.  As an independent organization without political or religious constraints, CIR's only reference point for all of our activities is human rights. The only "political" interventions carried out by the organization in fact are those aimed exclusively at creating improved conditions for persons forced to flee their own countries.

CIR, long involved with the issue of transit countries affected by thousands of refugees coming principally from Sub-Saharan Africa, also carries out a series of activities aimed at improving conditions for refugees, asylum seekers and migrants in Libya and Algeria, and providing "capacity building" assistance to institutions in those two countries.

To reinforce the importance of our support activities in third countries, in 2009 CIR modified its charter to include cooperation activities on behalf of refugees, asylum seekers, and migrants among its action priorities.

As the Italian member of ECRE - the European Council on Refugees and Exiles - CIR has always promoted political and legislative responses by the European Union to improve the conditions for refugees on the entire continent. 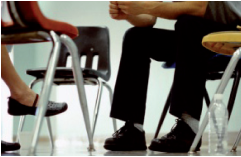